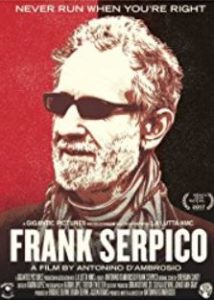 A genuine hero from back in my teenage days, former New York Police Dpeartment officer and detective Frank Serpico wanted to do what was right: help people. But dirty cops and various police hierarchies and politicians had no use for civil servants such as him. One would think doing what is moral would be welcomed in most if not all settings but not necessarily so.

Coming away from this documentary, one element that remains muddied is why no police officers, including Serpico’s partner at the time, called in an officer shot code on the night Serpico was shot in the face. The incident is raised when Serpico meets with his former partner during the film but never fully answered. Some drilling down pn this most critical of questions is missing. Give Serpico credit as I wouldn’t be meeting with any former co-worker who failed in life-saving efforts during my gravest time of need.

Do see this for two reasons. One, it’s refreshing to witness someone with scruples in action and, two, Frank Serpico is quite the interesting character.

Here is another similar situation of doing the right thing not just going unrewarded but actually punished: